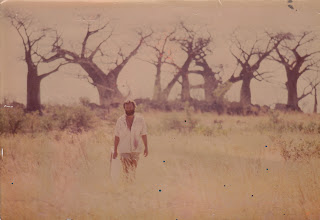 Africa has lost a great talent. Keith Joubert was unquestionably one of the most gifted artists that this continent has produced. He was born in humble surroundings in Germiston in 1948, grew up in the tough Johannesburg suburb of Mayfair and passed away in the affluent northern part of Johannesburg at the end of January 2013 aged just 64. Those bones of his life belie the compulsion he had to travel to remote places and commune with the wild to gather the mental images he needed to capture Africa – its animals, people and atmosphere – on canvas like no other before him. He had many imitators but before they could catch up he would simply raise his game. He changed forever the way Africa would be painted. Joubert’s works hang in many major corporate and private collections around the world and his clients include royalty from Europe and the Middle East. He has held major exhibitions in many of the art capitals of the world including London, New York, Paris, Texas, Johannesburg and Kasane. But to talk of Keith solely as an artist would be an injustice to my close friend and the godfather to my daughter. Over the twenty odd years that we were friends I came to know a man who embraced life more fully than anyone else I have met. Whether he was working, partying or travelling he did it, uncompromisingly, at full throttle. Half measures and mediocrity he despised as much as he did arrogance. He was at his most combative when it came to seeking solutions to conservation issues when his unique mind would seek answers from outside of the box. Where most followed convention Keith blazed new trails. Success in this world of ours attracts material gain but Keith disdained the accumulation of objects and his sprawling farm home was almost spartanly furnished while his studios in the Botswana bush were tents or simple cabins. The one thing that struck me most about Keith was his ability to treat everyone in the same jovial manner, whether she was a client from the British Royal Family or a petrol attendant at a dusty station he always engaged them in a similar friendly way. He caused many people to smile. He leaves an empty hole in the lives of Val, the woman he loved so transparently and deeply, and his talented brother, Dereck and his wife Bev , as well as his beloved goddaughter - not to mention princesses, friends and petrol attendants from around Africa. Go well my friend and may your soul have mercy on God because you know he can’t keep up.
Posted by Val at 7:24 AM No comments: 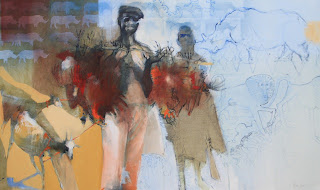 We were driving on a sand track in a remote region of the Sao Sabastiao peninsula in Mozambique when we came across this couple on their way to market. They are subsistence farmers, and he had a pole across his shoulders from which hung some ten or fifteen live chickens; his wife had two goats on ropes that were dancing and jumping around her. We gave them a lift on the back of the truck, and people nestled in surrounded by squawking chickens with bright glossy feathers, and very active rope dancing goats. The images around the painting are creatures that share the subsistence environment, and who may also represent produce gathered for the market place.
Posted by Val at 2:21 PM 1 comment:

One of the projects Keith has worked on this year is a series of totem poles
using old fence posts that are made from African hardwoods such as Leadwood (combretum imberbe) and Mopane (colophospetmum mopane).
This wood has stood rooted in the granitic soil  of South Africa's lowveld for hundreds of years. First as a living tree, then later as cattle farming came to this wildlife area, these trees were shaped into everlasting corner posts for cattle fences.
They have weathered and baked in the lowveld heat, seasonally pounded by rain, and seared by droughts that we can only speculate upon. Every natural surface of these posts tells a story, and has been used by other species - great and small, as habitat or rubbing post. 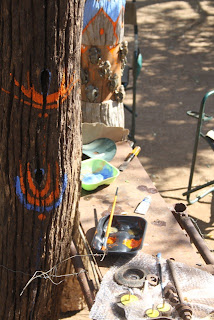 Each post seems to house an individual spirit of its natural environment.
To work on them, Keiths studio was outside in the broken shade of a big old Bird Plum Tree (berchemia discolor) that is wrapped in a Python Creeper. 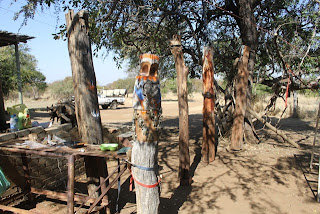 The theme of these totems is the nexus of life and death
The living tree, lives on in the fence posts and sculptural artworks. Each post is endorsed with images and bronze work, both gathered and formed by the artist.  The images arise out of the sense of the ancient wood - each determined by forms, curves and fissures shaped by natural events in the history of the tree. 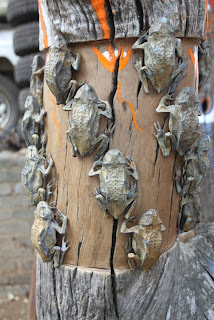 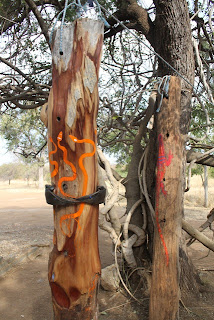 The bronze frogs were cast from a dessicated frog form that was collected from a sand track in northern Botswana and cast in bronze.  The frog may have died crossing the baking sand too far from the nearest waterhole. The detail of its living form was perfectly preserved and has been cast to include the tiniest detail.  The bronze frogs appear to be migrating along the fissures of the leadwood post.

Snakes are often used to symbolise transformation and change.  They would also have investigated, and perhaps used, these very poles - as would the lizards of many colours.  All form part of the living ancient landscape that is holistically encompassed in the Nexus series.

These totem poles can be viewed at
Everard Read Gallery, Johannesburg 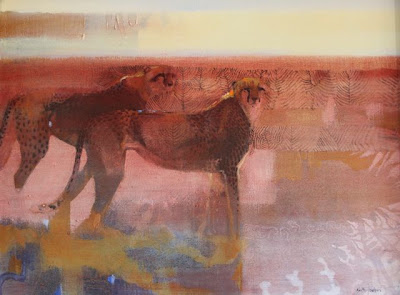 Cheetah brothers hunting in a coalition on the floodplains of Selinda Reserve, northern Botswana 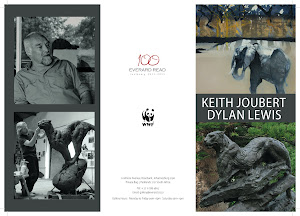 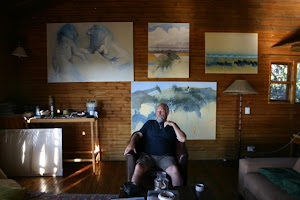 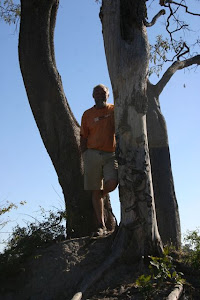 at work on Golden Moth 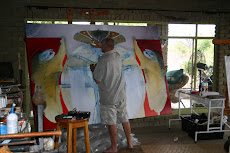 All pictures, paintings, images, text, titles and anything that appears on this blog is copyright to Keith Joubert and cannot be reproduced in any form without permission. 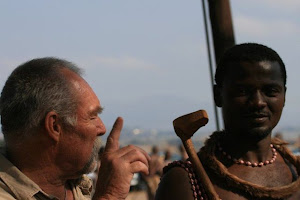 at the Swazi Reed Dance 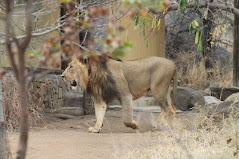 view from the studio, sunday